If you enjoy the outdoors and go fishing with your family on a regular basis, you may have used fishing reels.

The spinning reel, which you can use for various fishing techniques, is one of the best all-purpose fishing reels.

If you’ve ever wondered why top spinning reels come left-handed, look no further because we’ll explain why they were designed in that manner.

This article will also cover converting a left-handed spinning reel to a right-handed one.

Why Are Fishing Reels Left-handed?

Why fishing Spinning reels are left-handed 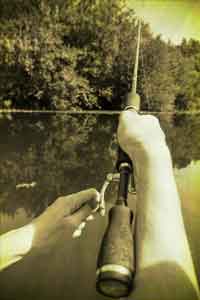 Are you left, or right? The hand you have on the reel makes a difference.

If you are right-handed, there are several obvious benefits to having the spinning reel handle on the left side.

It is inconvenient to constantly switch hands after using your right hand to cast a bait and reel.

To fight larger fish, you hold your rod in the dominant hand.

Turning a reel handle is a straightforward task that can be performed by your non-dominant hand.

The faster dominant hand grips the rod and places the hooks more quickly.

Since you don’t switch hands between each cast, it is more efficient.

Additionally, when using left-handed spinning reels, you use your left hand for spinning and your right hand for more casting activities.

Because the majority of anglers are right-handed, left-handed spinning reels are produced.

Let’s examine each of these aspects separately.

Turning a reel handle is a straightforward task

Simply said, since the Grip shape is based on comfort, it’s best to let your non-dominant hand do the more straightforward work of twisting a reel handle, allowing you fully utilize your dominant hand.

To fight larger fish, you hold your rod in the dominant hand.

Everybody has a dominant hand or arm.

It accomplishes the task better than the less dominant hand or arm; thus, we utilize it better for our regular activities. It’s the same with fishing.

Casting a fishing rod will come more naturally to the dominant hand or arm than it would to the non-dominant.

Using your dominant hand when casting a left-handed spinning or baitcasting reel has more benefits.

With the thumb of your non-dominant hand, you can more easily regulate the spool speed.

I suggest everyone new to fishing or angling hold and cast the fishing rod with their dominant hand or arm.

I don’t think that really matters. When fishing for larger fish, I do find that I have superior rod control when utilizing my dominant hand or arm on the rod handle.

Your dominant hand moves more quickly and precisely and has more decisive control over subtle changes.

It may be more challenging to regulate motions with the non-dominant hand.

Try to avoid the switch to enable free-flow fishing.

Why do you need a left-handed reel? 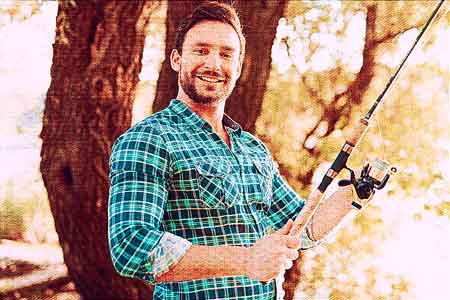 With a left-handed spinning reel, turning the reef handle causes the bail arm to revolve around the spool.

Thus, the line is wound onto the spool by the combined efforts of the bail arm, spool, and handle.

When the bail arm is opened, the line is released, allowing the line to roll off.

The line will wrap into the spool once you have finished casting by shutting the bail arm.

A drag mechanism is built into the left-handed spinning reel to prevent circumstances in which a larger fish can break or rip the line.

The drag knob can be used by rotating it both clockwise and counterclockwise.

The reel contains ball bearings, which are essential because they translate the handle’s rotation into the rotation of the bail.

Additionally, a left-handed fishing reel or spinning reel has a gear ratio.

Unlike the bait cast reel, in which you cannot switch the crank handles, modern spinning reels, on the other hand, are made so the handle can be swapped to either side of the reel, suiting the right-handed person- and left-handed.

Considering this, I believe that spinning reels are appropriately designed because it makes sense.

The known bait casting reel is primarily made to be right-handed, but in the end, we are happy to know now that most reel producers have changed their stance and now provide the majority of models in both configurations.

What makes a fishing reel right- or left-handed?

For fishing efficiency, left-handed reels are primarily designed to be used with your left hand if you are a right-handed person.

On the other hand, right-handed reels are designed for you to use with your right hand, which is less efficient.

You might want to ask if most anglers are right-handed, and it’s best to let your non-dominant hand do the more straightforward work of twisting a reel handle, allowing you fully utilize your power arm better.

Why do the conventional baitcasting reels come right-handed?

For the right-handed reel position, there is a compelling argument.

Some claim that baitcasting reels have a smaller radius and are easier to manage with your more substantial hand, which is typically your right.

But the truth is that the fact that right-handed baitcasters have their grips on the opposite side of spinning reels is most likely the result of historical precedent.

Conventional reels are older than most spinning reels.

The winding action was quite important to those antiques.

It is obvious why they chose the more dominant hand for this task because turning was of paramount significance to them.

The reel handle is likely on the right side, as most of us are right-handed.

But the truth remains, right-handed fishing reels with handles on the right side are rather challenging because you have to switch hands every time after casting a bait and reel with your right hand.

For this reason, most reel manufacturers have changed their stance and now provide the majority of models in both configurations.

Because with your new fishing reel (spinning), it is simple and easy to learn how to switch your reels for a better experience, regardless of the side that feels the most comfortable for you.

From right to left-handed reel

Follow these simple steps to switch your reel handle from the left side to the right.

From left to right-handed reel

Follow these simple steps to switch your reel handle from the right side to the left.

The dominant hand or arm casts a fishing rod more efficiently than the non-dominant.

It is highly inefficient to have to switch the rod to the other hand at the end of each cast because you keep the rod in your dominant hand while casting.

That said, shifting your bait casting rod or spinning rod back and forth all day is time-consuming.

Because of this, spinning reel handles are primarily made to be left-handed, and as we have noted, it is very efficient.

So, it is wise to use left-handed models if you are right-handed as it allows you to handle top-water baits more effectively since you can begin reeling as soon as the bait touches the water without swapping hands.

In contrast, left-handed fishermen, shouldn’t go for left-handed baitcasters but right-handed ones. But in the end, it boils down to personal preference.

Should reel you reel with your left hand if you are right-handed?

Yes! If you are right-hand dominant, there are several obvious benefits to having the spinning reel handle on the left side. It is inconvenient to constantly switch hands after using your right hand to cast a bait and reel. To fight larger fish, you hold your rod in the dominant hand.