If you see a couple of anglers causing a commotion, chances are, they have caught black or white crappie!

Considering it is one of the most sought-after freshwater fish in the USA, that reaction is to be expected.

There are a couple of reasons why black and white crappie is high on every angler’s list. For one, they are delicious.

Crappie fishing also happens to be an enjoyable sport, they are quite easy to catch, spawn very fast, and have high commercial value.

To join in on the fun, here’s everything you need to know about the two recognized species, black crappie, and white crappie.

If you’re looking for the best crappie rods on the market, we’ve got your covered.

All You Need To Know About White Crappie and Black Crappie

Scientific Classification of The Crappie Species

Crappies are a freshwater fish species with the largest population in the sunfish family.

In the USA, crappies are found in almost every state.

They were once native to the eastern waters but were slowly introduced throughout America.

Only Alaska and Hawaii don’t have a black and white crappie population.

Both species of crappies are known by numerous names, some of these nicknames include strawberry bass, speckled bass, specks sac-a-lait, calico bass, papermouths, etc.

While both, white crappie and black crappie belong to the same family and genus, they are two different species. 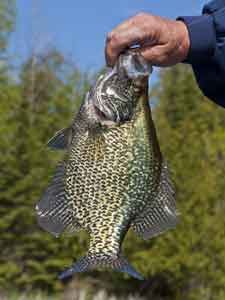 When white and black crappie crossbreed, they form hybrid crappie.

It is a rare occurrence and usually only enabled when the spawning habitat is limited, the water is turbid, there are fluctuations in water levels, and the spawning seasons overlap.

These hybrids of black and white crappie have a short life span and rarely reach maturity, and on the rare occasions that they do, their next-generation hardly survives and the population thins out eventually.

The biggest difference between the two species of crappie is the physical one.

Here’s how you can identify and distinguish between the two:

Belonging to the sunfish family, the black crappie is distinguished by its ray-fins.

The back of it is dark olive with shades of purple and emerald.

The sides and belly of the black crappie are silvery white.

What stands out and earned black crappie its many nicknames is the dark green and black, speckles and irregular dark blotches on either side. It also has spotted fins.

There’s often a dark brown stripe running down the middle of its back, extending from the front of the dorsal fin up to the tip of the lower jaw.

The stripe goes all the way under the head and along the length of the throat.

The best way to tell apart black crappie from the white one is to count the dorsal spines, which range from seven to eight. 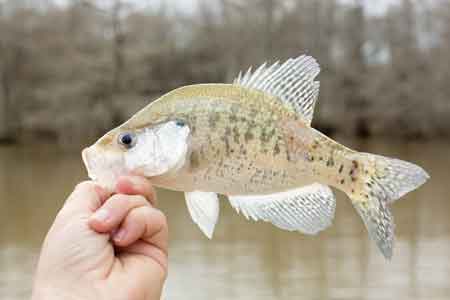 White crappie has the same olive-colored backs as the black crappies.

The sides too are silver and white with rows of black and brown regular dark bars running along the length.

The body markings of white crappies are slightly different from black crappies.

The black and brown spots on white crappie closely resemble vertical bars, rather than the speckles found in black crappies.

Even though the coloring of the two species is similar, when compared side by side, the white crappie is much lighter than the black crappie.

The regular dark bars are more prominent too.

The best way to differentiate white crappie from black is to count the spines on the top dorsal fin, which ranges from five to six.

White crappie also has a larger mouth than black crappie.

Here’s how you can learn to differentiate between black and white crappie:

The length of an adult white crappie ranges from 17 cm to 53 cm. With black crappie, a typical adult will grow in length from 13 cm to 31 cm approximately.

While close in length, the two species differ prominently in shape.

Black crappie tends to have a more compact shape and a round body.

An adult black crappie weighs about 2 pounds on average.

White crappies have 5-6 spines on their dorsal fins whereas black crappie has 7-8.

Position of the Fins

In white crappies, the dorsal fins are positioned farther from the head.

In black crappies, the dorsal fins are much closer to the head of the fish.

White crappies have a larger mouth compared to black crappies.

Black crappie also has an upward-shaped mouth, with the lower jaw jutting upwards.

Habitat of Black Crappie Vs Habitat of White Crappie

Both, black and white crappie are freshwater fish, but they tend to have different habitat preferences when it comes to their habitat.

Black crappies also like to swim in areas with plenty of vegetation to provide cover.

Most times, black crappie fish are found in low-velocity spots with little to no currents.

In winters, black crappies flock near the shallow waters.

They also prefer shallow waters when they are feeding or spawning.

White crappies are less particular about their habitat.

They don’t care much about water clarity around them.

They do tend to prefer open waters and are less likely to hide in vegetation.

They do not hesitate from swimming in murky waters and have developed a high tolerance for it.

During the mornings and evenings, white crappie likes to swim in open waters, but in the daytime, they are often found swimming in quiet shallower areas.

Both species have a similar diet. Although just like their habitat, they do have dietary preferences and have slightly different feeding habits.

Here’s what black and white crappie like to eat:

Young white crappies grow up on zooplankton. As they grow older, they can eat small crustaceans.

By the time white crappies reach adulthood, they can devour and hunt small prey and insects.

The diet of white crappies includes:

Since they live in areas with heavy vegetation, young back crappies’ diet mainly consists of algae and zooplankton.

They are nocturnal and prefer feeding in the evening until the early morning hours.

The diet of black crappie includes:

Both white crappie and black (and the hybrid) are ambush predators.

They hunt and feed at night and in the morning.

They have a feeding pattern where they avoid wasting energy and stop to hunt when they have located the prey by sight.

An experienced angler knows that a school of crappie laying very still in the water means they have prey in sight, and that’s the best time to catch crappie, many at once.

The popularity of black crappie as a sports fish has led to its expansion through stocking.

It is now populated as far west as the Mississippi River, towards the north till the borders between Canada and the US, and towards the south on the Gulf coast.

It is native to the Mississippi Basins, the Great Lakes, Mobile Bay, Nueces Rivers, the Red River, and Hudson Bay.

White crappie has also been introduced throughout the United States, Mexico, Canada, Panama, and Morocco. 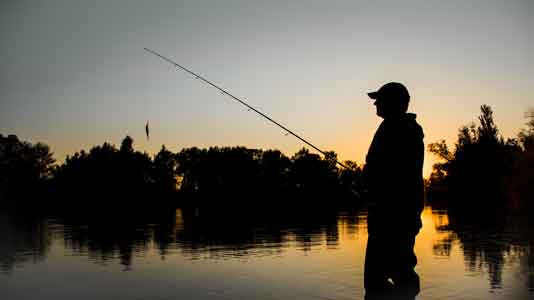 The best time for anglers to fish for crappies is morning and the evening.

These are the prime feeding times of both the white crappie and black since they are nocturnal.

You might also head out in complete darkness, after midnight, to catch some crappies and you are likely to have some amazing catches.

Both, white and black crappie like to feed in shallow waters, which is another handy bit of information to help you set up in the right spot.

Live bait, as well as artificial lures, can be used for crappie fishing.

Many anglers also head out towards deep waters for crappie fishing.

Although, fishing for crappies in shallow water with minnows, spinners, and spoons as baits results in huge success.

When crappie fishing for the first time, remember that both black crappie and white have notoriously thin membranes in their mouths.

Using a strong hook or a stiff rod for crappie fishing can tear through the thin membrane surrounding the mouth, and lose you a good game.

Taste of Black Crappie Vs Taste of White Crappie 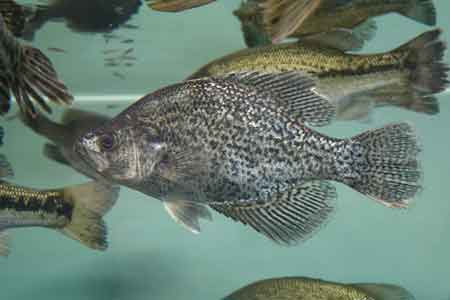 One of the reasons behind crappie’s overwhelming popularity is its delicious taste.

The meat of white and black crappie is stark white, delicate, and quite flavorful.

Black and white crappies have a similar taste, and it is nearly impossible to tell them apart once cooked.

It is only after you’ve had it many times that you can tell the difference.

The slight variation is that white crappie tastes a little sweeter than black crappie.

Whereas black crappie has a thicker and meatier texture due to its round and compact shape, and black crappie taste is mildly sweet.

It doesn’t have a strong fish-like taste, which is one of the reasons behind crappies’ commercial success.

Crappie is one of the most popular fish in the angling community.

The two recognized and well-known species of crappie include black crappie and white crappie.

Belonging to the same family, the two species have only slight differences in their appearances, habitat, and taste.

The best way to tell the difference is by counting the spines on their dorsal fin.

Although rare, the two crappie species do crossbreed and produce hybrid crappie.

Black crappie, white crappie, and the hybrids are night hunters.

They start feeding as the evening approaches and continue until the early morning. This is also the best time to go fishing for crappie.

Armed with all the right information, crappie fishing is incredibly easy.

That’s why it is the favorite game fish for the majority of anglers here in North America.