Fly Fishing: What Is It – All You Need to Know Fly fishing is a distinctive and thrilling way to explore our nature reserves; almost no other type of recreation can compare to the tranquility and sights it gives.

Furthermore, due to the exquisite movement of fly casting, fly fishing is frequently referred to as the most attractive type of angling.

Many fly fishermen use the sport as a form of meditation.

Fly fishing is a joyful and soothing form of fishing but also demands the most perseverance and expertise.

A fly rod, reel, weighted line, and some artificial flies are required to learn how to fly fish.

It would be best if you also looked for a good spot to start your fly fishing experience.

But then, let’s go into great depth about what fly fishing is, why it is called fly fishing, and everything else you need to know.

What is Fly Fishing? A Beginner’s Guide 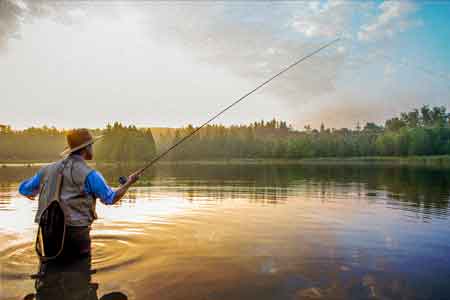 Fly fishing is a unique type of angling in which fish are attracted to a lightweight bait called an artificial fly.

You cast using a fly rod, reel, and a particular weighted line in fly fishing.

The casting methods for this lightweight baiting differ significantly from those needed for other casting types.

When fly fishing, you cast a very light “fly” out onto the water, either just above the surface of the water or just below.

Since the fly tying is so light, it is delicately presented onto the water to prevent startling the fish.

Therefore, fly fishing is more accurately described as a line casting technique than a lure-based method.

Although pike, bass, panfish, and carp are among the many species you can catch using fly fishing like trout, grayling, salmon, and many other marine species.

Saltwater and freshwater are suitable for fly fishing, but saltwater fly fishing is mostly done from a boat, so it requires more skills and practice for a trout fly fisherman to catch some saltwater fish on a fly rod.

You can also fly fish in freshwater creeks, rivers, streams, and clearwater areas like ponds and lakes.

Fly fishing has its roots in the days of ancient Rome when fishermen employed crimson thread to lure and catch fish.

After the English Civil War, the craft of fly fishing advanced significantly due to a resurgence in interest in fly fishing techniques that left its mark on the numerous books and literary works that multiple authors penned during the period.

Then in the mid-nineteenth century, the middle class and lower classes started to have an impact on fish fly fishing.

Remarkably, in the early-mid 20th century, the invention of fiberglass rods and synthetic lines led to the second wave of popularity. 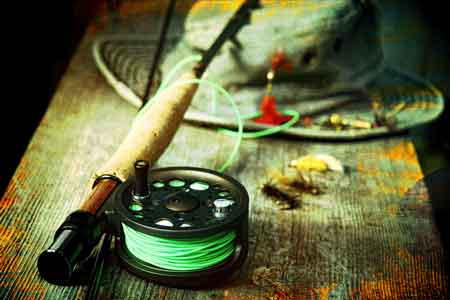 Casting technique and fly line set-up are combined to compensate for the fly’s lack of weight.

Let’s discuss a few of these combinations for this method of fishing. 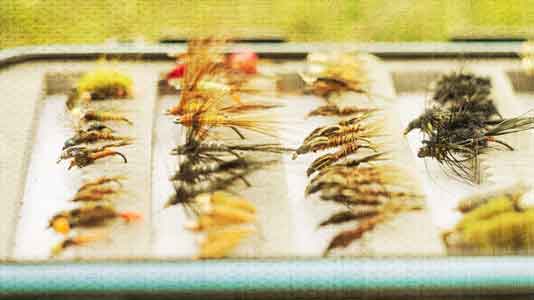 The choice of fly is essential for a productive fishing experience for fly anglers.

You’ll have difficulty catching fish if your fly doesn’t resemble the feed or natural insect the fish is looking for.

There are countless variations of fly designs that use a variety of characteristics—some of which may not perfectly imitate smaller prey fish —to prompt strikes.

These can be floating imitative flies or below-the-surface flies. 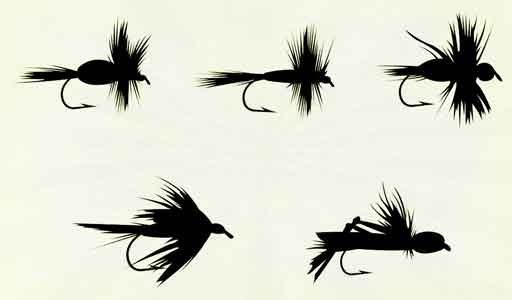 A dry fly commonly represents an insect that emerges on the water’s surface or top of the water.

Examples of such insects include grubs, dragonflies, and mayflies.

This feature makes it appealing to fly fish with them.

Below-the-surface flies, often referred to as Wet flies, are typically believed to resemble minnows and leeches.

Finding and selecting a suitable fly rod and reel is the most crucial decision for beginners regarding fly fishing equipment.

A quality fly fishing rod will make it easier for you to cast, learn, and catch fish, whereas a bad rod may be challenging.

I advise against purchasing rods because they are cheap.

Instead, I suggest you go for durable, reasonably priced fly rods and reels that are ideal for beginners for trout fishing.

The rods used for other bait fishing are not the same as fly rods.

Even when used with fly fishing lines, the motion and length of standard fishing rods are not intended to cast unweighted flies very far.

A fly rod’s length is important, especially for a beginner.

You can’t go wrong with a 9-foot, 5-weight rod when fishing for the great majority of species because they are lighter and simpler to cast as a beginner of fly fishing.

The 9-foot, 5-weight rod is made to bend for increased casting distance and is the best for fly presentation.

On the opposite, a spinning reel has a longer handle. The primary hand position on a fly fishing rod is in front of the reel.

In contrast, the primary handhold of a typical fishing pole is located behind the reel.

Fly reels support a rod’s balance and hold all the fly lines and backing necessary for luring and battling a fish.

You also need solid and dependable reels if you wish to catch sizeable Atlantic salmon or saltwater fish like tarpon.

Make sure the reel can also be used in saltwater and pay close attention to the drag system. 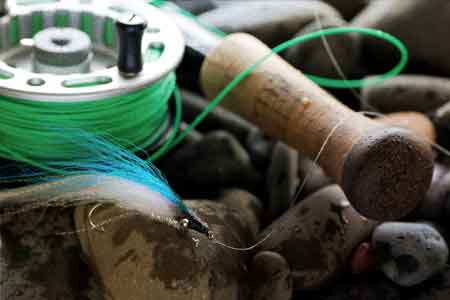 One of the most crucial components of your tackle is the fly line.

To start fly fishing, your fly fishing line must fit the rod properly; else, casting would be challenging.

The Fly line has the weight needed to make long casts since it is made to have weight.

Use the suggested weight for the rod you’ll use when purchasing your line. It would taper toward the end. In other words, it will be thicker at some lengths and thinner at others.

Avoid attempting a level line. Although they are inexpensive, casting them is nearly impossible, especially if you are a novice to fly casting.

Level lines are incredibly challenging, even with a lot of expertise.

The source of the weight is the main distinction between fly fishing and conventional fishing.

In fly fishing, the fly line itself provides weight during fly fishing.

Example: During traditional fishing, the tip of the line or monofilament has some sort of weighted item.

These include spinners, hooks with bait (artificial lure), and light-baited hooks with weights added to help with casting, but when fly fishing, you don’t have any weights attached to the leader (tip) of the line, and your hook weighs almost nothing.

Instead, the weight that is cast forward is the line itself.

The leader and tippet, which are the last few feet of line and are very light, are gently placed on the water to mimic the landing, takeoff, swimming, and jiggling action of the “insect”, you’re using.

Double taper lines were the norm for many anglers, particularly when dry fly fishing.

They have a longer, more even taper shape, which allows for a more delicate presentation.

Additionally, they offer the benefit of many uses.

You can easily flip the front taper around and fish the other end of the line after using it for a bit.

A leader (tippet) is required to tie a fly to a line.

The tippet is a particular size of monofilament line that is fastened to the end of the leader before the fly is tied to it.

The leader, which is connected to the end of the standard fly line, is the shorter, clearer length of the fishing line. In a clearer explanation, the primary transparent piece attached to the fly line’s end is called the leader.

This material will often be a pretty hefty weight when attached to your fly line (butt section). However, it will taper down in weight/thickness to the point where the tippet attaches.

On the other hand, the thin piece of material that you fasten to the end of the leader on one end part and the fly on the other is called the fly fishing tippet.

The trick here is to use the lightest yet strongest tippet you can cast without the fish noticing.

Your fly is attached to the tippet at this point. It is available in many different sizes, styles, materials, and even colors

Like fly rods, you must select your leader carefully based on the fish species(like large fish striped bass, small fish, smallmouth bass) you want to catch and the flies you use.

However, a tippet is not necessary for fly fishing. Instead, you can attach your fly directly to the end of your leader.

Tippet is not crucial to your fly-fishing setup unless you are nymphing or casting multiple flies. 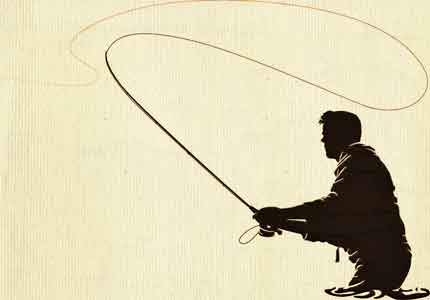 Another significant distinction between fly fishing and traditional fishing methods is the casting style.

In contrast to other casting techniques, fly fishing can be regarded as a technique of casting line rather than a casting lure.

It is simpler to throw the rod back and then out during traditional fishing but fly fishing is more complex and requires more art and expertise.

One of the common casting methods involves lifting the fly into the air, casting back over the shoulder until the line is almost straight, and then casting forward, typically utilizing the forearm.

The goal of this motion is to bend the rod tip with stored energy and then transfer that energy to the line, causing the fly line to cast for a noticeable distance.

Another challenging part of casting in fly fishing is dropping the fly onto the water and watching it move on or below the surface.

The angler tries to cast so that the fly appears as natural-looking as possible, and the line lands smoothly on the water.

Visualizing the actions of your arm on a clock is a simple approach to learning how to throw a fly rod.

For example, let’s say your arm is at twelve o’clock when it is up and parallel to your body.

You can maintain control and power in your casts by keeping your arm inside this limited range of motion.

If done properly, imitative fly will be the only thing the fish sees, not the fly line or tippet, and when it strikes the fly and be prepared to set the hook.

Setting the hook helps keep the fish on your line. You can set your hook by doing this.

Once a fish eats your fly, you draw back on the rod abruptly and forcefully, or you can strip set by pulling on the line with your free hand.

The strip set is completed by giving the line a single, forceful pull while keeping the rod still. You should pick up the line and try again if a fish doesn’t strike, depending on how the fly moves due to the wind or current.

We’re thrilled that you’re embarking on your fly fishing adventure.

Always remember that it’s crucial to purchase high-quality equipment at your local fly shop or online stores, even if it costs a little more because performance suffers from bad equipment.

There will be times when it appears difficult to catch fish. Everybody experiences it.

But don’t give up! When fly fishing, the scenery surrounding you is calm and beautiful and requires your attention.

Despite this, you should always be mindful of your location and use safe fishing methods.

Muscle memory and practice are vital components of casting.

You’ll have a more satisfying experience during your first few trips to the water if you master the standard, false casting and large roll cast methods before venturing out.

What is the difference between fly fishing and traditional fishing?

The casting methods for this lightweight baiting differ significantly from those needed for other casting types during traditional fishing. When fly fishing, you cast a very light "fly" out onto the water, either just above the surface or just below Therefore, fly fishing is more accurately described as a line casting technique than a lure-based method.