The skate is a ray-like fish that belongs to the Rajidae family. There are over 150 species in the family.

They are organized into 17 genera. Previously, pygmy and softnose skates were considered subfamilies of the Rajidae but are now considered separate families. 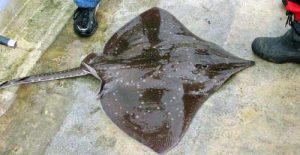 The Common skate is a small fish with a distinctive shape often found in oceans.

It was once widespread throughout the Northeast Atlantic and the Mediterranean, but now it is critically endangered.

Its low fecundity and low growth rate have made it susceptible to overfishing. It is also extremely slow to recover from mortality.

Until mortality rates are reduced, the species is unlikely to recover.

Despite the low population, this fish has been the subject of several studies. The largest skate in the European continent is the Flapper Skate, which has a wingspan of two meters.

It weighs more than a kilogram. Other researchers have studied the population size of common skates in the Sound of Mull.

In the Northwest Atlantic Ocean, several species of skate are common. The most commonly used species for eating are Winter Skate and Thorny Skate.

These fish are found from shallow ocean shores to depths of two thousand feet. They do not migrate on a large scale, but they are known to move inshore and offshore during the summer and fall.

They have egg cases resembling mermaids’ purses and can be found in various environments.

The common skatefish reproduces annually and mate in the same nursery grounds. The male skates use claspers to fertilize the eggs and direct the flow of semen into the female’s cloaca.

The young skates develop for around 15 months in the mother before they leave for the external environment.

The common skate can be caught using a wide variety of bait. Fish strips and whole fresh fish are ideal for baits, as sand eels, crabs, shellfish, and ragworms.

They feed over mixed rock and sand seabeds. They are easiest to catch close inshore. 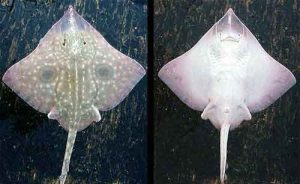 Skate fish are also equipped with weak electrical organs in their tails. Their dorsal fins are usually two, although some species have a single fin. Skate fish also have mouths on the underside of their bodies and are capable of complete respiratory exchange.

Skate fish are also known for their black egg sacks. They have five-gill slits on each side of the body. In contrast, bony fish have only one.

Interestingly, skatefish have a similar shape to stingrays. The only difference is the number of gill slits on their body.

Skates and rays are closely related, except they bear their offspring in eggs. Skates are smaller than rays, but both species have thorn-like skin on their tails.

They also mate on the same nursery grounds each year. The male skatefish has a clasper that he uses to transmit sperm to the female.

The female skate also produces eggs, which are fertilized internally and develop into a small capsule called an egg case.

Skatefish are members of the Rajidae family of fish. They are related to sharks, rays, and chimeras.

The evolution of skatefish and stingrays is believed to have occurred during the Jurassic Period.

The feeding habits of skatefish are varied and can be observed in natural habitats. In one study, the size of a skate’s mouth correlated with the length of prey eaten.

In another study, the body length of a skate was correlated with the total length of prey consumed. These results suggest that skates rely on various prey to survive and reproduce.

Skatefish are important members of marine ecosystems and food webs. Yet, their numbers are declining worldwide due to a lack of understanding of their biology and ecology.

Most studies on skates have concentrated on their distribution, growth, and reproduction, but very little is known about their feeding habits.

Furthermore, it is essential to understand the diet of skates to manage them appropriately in fisheries.

The feeding habits of skatefish vary according to size and depth. Skate diets were similar in smaller and medium-sized individuals, while larger skates were found to eat cephalopods and rock crabs.

At depths of 35 to 105 cm, skates ceased to eat caridean shrimp and began feeding heavily on benthopelagic teleosts. In addition, male skates tended to prey on the larger teleost fish.

The feeding habits of skatefish are important for understanding the marine food web and developing ecosystem-based management recommendations.

Researchers examined the digestive contents of two-hundred skates caught in a scallop fishery in the Georges Bank, Maine.

These studies provide a valuable resource for those interested in studying skates diet.

The feeding habits of skates are similar to those of rays. Like rays, skates have five pairs of gill slits and live births. In addition, their tails lack barbs.

Instead, they use thorn-like skin for protection. The two families of skates are closely related, and their feeding habits are similar.

Skate fish is a delicious and nutritious fish that provides several health benefits. It contains vitamin B12 and phosphorus, which contribute to the growth of cells in the body.

These nutrients also boost the immune system and promote healthy hair. Fish is also a good source of vitamin B6, which is important for preventing cancer and improving mental health.

Skate fish is an edible fish that lives in shallow and deep waters but is considered endangered in some areas.

The species is threatened by habitat destruction and commercial fishing, and its numbers are rapidly dwindling.

They are also slow to reproduce, and their eggs take about 15 months to hatch. Skatefish are also rare in brackish and freshwater environments.

However, one species is found in Tasmania, Australia.

Skate is a firm fish that is relatively easy to clean. Its flesh is light beige to pinkish when raw and off-white when cooked. It has a mild flavor, similar to that of scallops.

However, you should be careful not to overcook it, as it may separate the flesh. It can keep in the refrigerator for 2 to 3 days. It can also be reheated in the oven or a skillet with additional butter.

Skate is a hard fish to buy in stores but can be purchased at specialty fish markets. Skate may also be found in restaurants.

Skate contains ammonia, which can be poisonous if eaten. Skate meat is also best cooked before consumption.

Skate fish are flat-bodied cartilaginous fish in the order of Rajiformes. They are found throughout the world in tropical and near-Arctic waters.

They are often found in shallow water but also in waters over two thousand feet deep. They are odorless when alive but have an ammonia smell after death.

Skate is often served in restaurant dishes for its delicate flavor and unique appearance. Skate is usually about one-half to two feet long

and resembles a sea scallop. It is a popular choice for seafood lovers and can be bought anywhere fish is sold. It can also be purchased filleted.