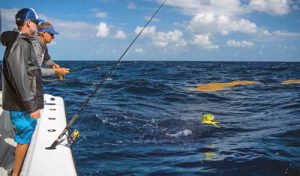 Many fishermen are frustrated by the lack of sargassum in the oceans, which makes locating and catching fish more difficult.

Unfortunately, commercial harvesting of the seaweed could threaten its continued existence. Capt. Chris Cameron of Fired Up charters in

Blue Points Marina in Tampa recalls fishing days when his dad scooped up the floating debris.

Sargassum is a habitat for tiny fish and crustaceans. Dolphins also use it.

While the naked eye can’t see sargassum, it is a significant issue for coastal towns, fishing charters, and boating. 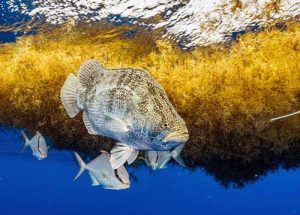 It began its life attached to the sea floor but has since drifted toward shore, posing a danger to boaters and coastal communities.

Clumps of sargassum clog up water intakes and can clog propeller shafts.

Windstorms have also been known to rip apart the seaweed, which is why it is important to check out the seaweed situation before you head out to sea.

In addition to choking off fishing opportunities, sargassum can be a great dive site. Because it eats up oxygen, it significantly impacts marine life in coastal areas.

Because of these impacts, the government of Mexico has established guidelines for removing sargassum from beaches.

Sargassum is a brown macroalga that floats freely across the sea. These organisms are a prime source of food for many fish species.

This plant can also be a nuisance for beachgoers as it attracts flies. In addition to affecting fishing opportunities, sargassum can damage sea turtle nests.

The sargassum blooms have affected coastal areas around the Caribbean since 2011.

The causes of these blooms are unknown, but scientists suspect human sewage, runoff from the Amazon River, and changes in ocean currents caused by warming seas.

The growth of sargassum is largely due to the decomposition of algae, which drains the water of oxygen.

Boaters are also concerned about sargassum’s effects on their engines. Because it can clog up propellers and intakes, sargassum can hinder the efficiency of engines and internal systems on boats.

It has even been known to shut down boats.

Experts are calling this problem the “new normal.” They are advising offshore anglers to downsize their fishing spreads and mothball dredges.

They have also suggested that they limit the number of lines they use in spreads and reduce the size of their lures. In the meantime, the problem will not be solved with a vacuum.

Despite this, some local entrepreneurs are trying to find solutions.

Sargassum is an important part of the oceanic ecosystem, providing shelter for more than 100 marine species.

It is a food source for young sea turtles and provides shelter for seabirds.

It also supports many other species of fish. Its growth and decline are based on seasonal changes in water temperature.