Herring – A Delicacy and a Staple Food in Many Cultures

Herring is a popular pelagic fish that is a good source of omega-3 fatty acids. It is also a delicacy and a staple food in many cultures.

Here are some ways to enjoy this tasty fish. – Make rollmops: Roll herring fillets and secure them with a cocktail stick, then boil them in water and vinegar.

You can also add bay leaves for added flavor.

Herring is a pelagic fish

Herring is one of the most important species of pelagic fish, and it feeds in warm and cold waters. During the spring and summer, herring congregate in large shoals.

Their diet consists of planktonic copepods. Herring spawn in deep waters, where they deposit large quantities of eggs. Herring flesh contains a high concentration of fatty acids and is highly nutritious.

Herring can be divided into two distinct subspecies. The shelf and oceanic varieties are slightly different in size and body shape.

The oceanic species have a larger body and more vertebrae than the shelf species and have keeled scales on their ventral surface.

The Atlantic herring is the largest of the two, reaching 46 cm (18 in), while the Pacific herring is only about eight inches long.

It is a delicacy 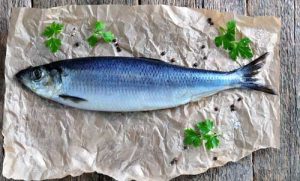 In Estonia, the Baltic herring has been declared a national symbol. Small oily fish is a staple of the Estonian diet. It is so tasty that the country has even created its cuisine.

But the small oily fish has also created an emotional debate. The country has seen internet polls, accusations of fraud, and even parliamentary debates over its status.

Swedish herring sandwiches are made from thin bread and contain fillets of herring. These are arranged on top of finely chopped onions and potatoes.

The fillets are then wrapped and eaten by hand. The sweet potatoes and onions help balance the herring’s strong taste.

In addition, the sour taste of the herring is neutralized by the ingredients. In addition, a little goat milk whey cheese is often added to the dish.

It is a source of omega-3 fatty acids

Herring is rich in omega-3 fatty acids, which are beneficial for the heart. They can lower cholesterol and blood pressure, two things that lead to heart disease.

Additionally, they may help lower high blood pressure and reduce the risk of a heart attack. This makes herring a great snack for anyone who wants to maintain a healthy heart.

Herring contains a high concentration of cetoleic acid, which boosts omega-3 conversion in the body.

Until recently, scientists at Nofima didn’t realize how important cetoleic acid was for the human body.

It is a staple food in many cultures

Herring is a popular food in many countries and cultures. It is served in many forms as a snack, appetizer, and main dish. In many northern European countries, herring is served as a staple food.

In the UK, kippers are usually served with black pudding and eggs. In Germany, kippers are often served as part of a salad or rolled-over gherkins and sauerkraut.

It is also enjoyed in many other forms, including fish sandwiches and fried fish.

Herring has been a staple food throughout history. For example, raw herring with raw onion is a spring delicacy in the Netherlands.

In the Philippines, herring is usually eaten dried with rice and eggs. It is served as a side dish to flatbread and mashed potatoes in Sweden.

The term “herring choker” is used to describe an individual from the New Brunswick region, and it originated from a stereotype that people from the Maritimes only eat fish.

The phrase has also been used to describe individuals of Scandinavian descent, especially those living in landlocked enclaves, including the state of Minnesota.

The term has come to mean “a person who chokes herring to preserve it for later consumption.”

In the past, a person would have to catch the herring herself, but today it applies to those who rely on commercial canneries to pickle their fish.

Herring spawn in spring and migrate to the Norwegian Sea in summer. They spend their first year in the inshore region, feeding on the copepod Calanus finmarchicus.

But the species distribution shifts over the years as decadal changes in oceanic conditions occur.

It is sometimes walked on

The Herring is a unique symptom that can cause size, time, and space distortions. Its distortions are also linked to feelings of contentment, benevolence, and blessing.

Many provers have described feelings of bliss and benevolence and a sense of unruffled contentment.

They also report great sleepiness and lethargy. But, they report being able to perform multiple tasks without any difficulty.

The Herring is a common fish found throughout the North Atlantic and North Pacific Oceans. It is a member of the Clupeidae family and has around 200 species.

For centuries, it has been a staple food source in Europe. Unlike other fish species, herring is an obligate schooler, which means it must remain in a group or die.

Because herrings are so fast, herring schools can be very impressive to watch.

It is a filter feeder

Herring feed on small organisms, such as phytoplankton, in surface oceanic waters. Later in their life cycle, they will start to eat larger animals, such as krill.

During the day, they stay deep in the ocean and come to the surface only at night, when they are less visible. They swim with their mouths open and feed this way.

Young herring hunt copepods alone, while adult herring use a raptorial feeding style to go after larger prey such as krill.

The diet of herring was closely related to the diet of mackerel and blue whiting. The proportion of fish caught at the same location showed the highest overlap in dietary composition.

This suggests that they feed on the same patches of food.

It spawns in freshwater

The salinity of a river system is a crucial factor in determining the time of the spawning season for herring. The salinity of rivers can vary considerably from one site to the next.

Blueback herring spend most of their lives in saltwater but migrate into freshwater rivers to spawn. They prefer to spawn in rivers that are slightly warmer than seawater.

They deposit their eggs in river beds with moderate currents. After hatching, the juvenile herring proliferate and migrate downstream to the ocean.

Blueback herring reach maturity in three to four years for males and four to five years for females.

It is harvested for its roe

Every year, the Heiltsuk people harvest herring for its roe. The harvest is like a movable feast.

Weeks of preparations go into it, from boat bailing and tuning to gathering ropes, buoys, and kelp and hemlock boughs. Spotter planes scout the water for the first signs of herring.

According to Heiltsuk lore, the harvest begins when the moon is full.

Herring is a valuable resource in the ecosystem, serving as a food source for marine life. It also provides food for birds, wolves, and seals.

Moreover, it helps sustain coastal ecosystems. Traditional ecological knowledge, rooted in thousands of years, guides the management of the species.

It is caught for its meat

The commission develops regulations in close cooperation with NOAA Fisheries, which implements these recommendations.

The catch limit for herring is set annually based on scientific information about the state of the stock. Once the annual quota is reached, the fishery is closed, and no more herring are allowed to be caught.

The Bay Area has a large commercial herring fishery. Thousands of herring are caught in the San Francisco Bay each year.

Most of the fish are sold to the roe market, which requires huge quantities of the fish. Meanwhile, the seafood handlers at Fisherman’s Wharf are happy to sell a few handfuls of herring to retail buyers and restaurants.

However, the resulting fish is often not in good condition and will not appeal to discerning chef shoppers.