An Escolar is a white tuna. It is a fast-swimming fish that is high in fat. Because of its high-fat content, it causes oily diarrhea.

This fish can be found in deep tropical and temperate waters. It is often eaten raw or lightly cooked. Here are some facts about Escolar.

Read on to learn more about this fast-swimming fish. Its health risks include oily diarrhea and gastrointestinal distress.

Escolar is a white tuna 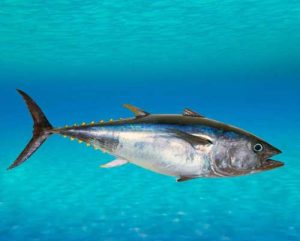 The escolar is a fish in the family of Gempylidae, found in deep tropical and temperate oceans. This large fish has a long, slender body with a white-tipped tail.

This fish has a unique white coloration and a distinct resemblance to a tuna.

Escolar has a rich, sultry flavor and a satiny texture. Its high-fat content makes it a great choice for sushi. Because of its high fat content, Escolar is often served in non-creamy preparations.

Other names for escolar include Black Oilfish, Snake Mackerel, and White Tuna.

Escolar is often confused with tuna and is a common source of dietary issues. But while the fish may be similar in appearance, some differences exist.

Although escolar and tuna share several physical characteristics, they are not related. While escolar has a milky white coloring, tuna has more opaqueness.

Escolar is a member of the Scombroidei family. Because of this, it requires careful handling and should be refrigerated after catching it.

This will prevent the growth of bacteria that produce histamine. While histamine poisoning is usually unintentional and manageable, it can be very serious for people with histamine allergies.

In severe cases, antihistamines may be required.

Escolar is not as healthy as some people think. Its oily and buttery texture is not derived from omega-3 fatty acids but is instead caused by a wax ester called gempylotoxin.

Although gempylotoxin is not toxic, it can cause short-term gastrointestinal havoc. Therefore, the FDA recommends against the sale of Escolar.

It is a fast-swimming fish

The Escolar is a fast-switching fish with a body length of seven feet and a weight of up to ninety pounds.

It has a fusiform body with a superior mouth that boasts two pairs of fangs. While young escolars are gray or brown, they change to a dark blue-black color as they mature.

The escolar’s tail is long, with a sideways keel and a series of smaller keels.

The Escolar lacks a visual streak, but it possesses two areas of the retina specifically designed for detecting objects against a dim background.

These regions are found in each eye and appear to improve distance judgment in the upward and forward directions.

The escolar is also thought to use the temporal and ventral areas of the retina for feeding.

Escolar is a large, fast-swimming fish in warm tropical and temperate climates. Despite its name, it is a solitary fish most of the time, although it can occasionally be found in large populations.

Its dark skin and large eyes make it look similar to Tuna, and it has a similar body shape.

The flicker fusion frequency (FFF) defines the FFF of escolars. This value is maximum in the highest light levels and decreases as the depth decreases.

The FFF falls to less than two Hz in low temperatures and dim light. This slow vision is typical of animals that need to function in low light.

In contrast, most day-active mammals have a higher CFF.

It is high in fat

Escolar is high in fat and can cause food poisoning, especially when ingested in large amounts. It is high in mercury and other toxins, putting people at risk of becoming ill.

It is not recommended for human consumption. If you are concerned about your health, look for other fish to eat instead.

Escolar can be prepared in several different ways. It can be pan-fried or roasted. It is best to cook it quickly within a couple of days of purchasing it.

Cooking it properly is important, as the fish can spoil if left uncooked. The recommended serving size is six ounces or less. The meat should be cooked thoroughly but not too long so it is still juicy in the center.

If you are consuming escolar for the first time, consume small portions. However, this can vary from person to person.

Escolar is a popular fish, though it is high in fat and should be eaten only in moderation. It is often sold in sushi restaurants and resembles swordfish and tuna in texture and flavor.

However, it should be avoided by people with seafood allergies, as it can lead to gastrointestinal problems.

Escolar contains about 20 percent indigestible oil. This substance is called gempylotoxin. It is not toxic to humans, but it can cause gastrointestinal reactions in people.

It is considered a natural product derived from fish diets.

Escolar, a type of oily fish, has been linked to several food poisoning outbreaks, including oily diarrhea, leucorrhoea, and nausea.

The symptoms of this illness can vary from mild to severe but usually occur one to 90 hours after consumption. It is often accompanied by abdominal cramps, nausea, and vomiting.

People with bowel disorders or malabsorption problems may be at greater risk.

Escolar is very oily, containing 20 percent wax esters. These esters are indigestible by humans and are thought to be the main cause of symptoms.

It is not illegal to sell escolar, but it is advisable to make sure it is properly labeled.

Because oil is less dense than water, escolar can cause an unpleasant digestive experience. It should not be eaten by pregnant women or people with bowel problems.

Avoid escolar altogether if you are prone to gastrointestinal issues.

If you eat escolar for the first time, ensure you eat only a small portion and consult a doctor if your symptoms persist.

Escolar contains mercury and histidine. The latter can cause a severe allergic reaction in humans if eaten in high enough concentrations.

This condition is common after eating certain types of fish, such as escolar. In such cases, it is best to limit consumption of escolar to no more than 6 oz per serving.

Nevertheless, it is best to eat small portions and avoid eating them if you have a weak immune system or digestive system problems.

It is used in folk medicine in the Canary Islands

Escolar is a fish from the Canary Islands. The fish contains high levels of wax esters and is often used as a natural remedy.

It is recommended to eat small amounts to avoid side effects. Its use in folk medicine in the Canary Islands was first documented in 1841.

The Canary Islands have several herbs used in folk medicine. Canary Island Sage, for example, is an herb that grows on the slopes of mountains.

The bush has small bell-shaped flowers and orange-yellow berries when ripe. The plant has a strong anti-inflammatory and antibacterial effect, which makes it particularly effective for fevers and infections.