Bonito Tuna: All You Need to Know Did you know that Bonito Tuna are extremely fast swimmers and can achieve speeds of up to 40 miles per hour?

That is twice as fast as Usain Bolt!

This strong streamlined predator might have ungodly speed, but anglers around the world catch Bonito Tuna as its meat has high levels of protein and moderate fat content.

Bonito tuna is also a highly prized catch that can fetch a fair sum of money. In this guide, we’ll be covering everything you need to know about Bonito Tuna.

What You Should Know About Bonito Tuna

What kind of Fish is Bonito Tuna? Bonito is a small to medium-sized predatory fish belonging to the same family as tuna and mackerel – the Scombridae family.

In the angling community, Bonito Tuna is known by many names.

The name skipjack refers to its swimming style which involves skipping and jumping across the surface of the ocean.

Bonito tuna is one of the most oceanic species of the tuna family.

You’ll find Bonitos worldwide, in the open ocean, as well as near the shores inhabited by kelp forests.

As they cover great distances, they are highly adaptable to different oceanic environments.

Bonito belongs to the genus, Sarda, and its four main species are found around the world:

All species of Bonito are named after their geographical distribution.

Although they are found worldwide, the exact population of Bonito is unknown.

Mainly because they are always in motion, moving from one region to another.

The Pacific Bonitos or Sarda chiliensis are found in great numbers from Chile to the Gulf of Alaska.

This species of Bonito Tuna love the warm temperature and you are likely to come across a large concentration in Magdalene Bay, Baja California, southern California, and Mexico.

Sarda Sarda or the Atlantic Bonito are spotted between Norway and South Africa.

The Black Sea, the Mediterranean Sea, and the northern Gulf of Mexico are also home to Sarda Sarda.

Sarda Australis Bonitos prefer the mild temperatures near New Zealand and Australia and the range of Sarda Orientalis spreads out from the Gulf of California to Peru.

They have also been sighted in the Oceanic Islands.

The Habitat of Bonito Tuna 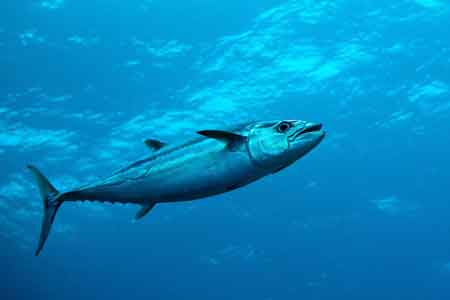 Bonito Tuna prefer to live in different habitats. Some choose to swim in open waters, others prefer to stay close to the shores.

General observation suggests that juvenile bonitos are found near the shores, staying close to kelp forests. Occasionally, they might swim into harbors or bays.

Adult bonitos, which are faster and stronger, can swim up to 300 feet below the water surface.

They don’t need the safety of kelps and they always swim in large schools.

As it is a migratory fish, Bonito swims to great lengths and covers unimaginable distances to find food, safety, and spawning grounds.

It requires them to use a high amount of energy to swim so fast for so long. High energy equals high oil content.

Of all the Bonito species, the one in the Northern Pacific is the most popular.

They are called “the chicken of the sea” due to their stark white meat.

It is better known by the name White Tuna or Bonito del Norte tuna and is largely popular in the USA, and other parts of the world.

The Physical Appearance of Bonito Tuna

Bonito del Norte is shaped like a torpedo with horizontal black stripes on the upper and middle flanks.

They are streamlined with silver underbellies, a narrow tail base, and a forked tail.

These finlets keep them stabilized and help them maintain high speeds and mobility.

The two dorsal fins of Bonito fish are blue-green in appearance.

Bonitos have a strong jaw with a single row of small and conical teeth.

The lower jaw of pacific Bonito is moderately large with 14-25 teeth.

All species of Bonitos are ram ventilators. They can catch their prey but can’t bite them.

Instead, they suck prey whole into their mouths and digest them. That is why Bonitos prefer smaller fish to feed.

Some of their favorite food includes sardines, anchovies, shrimp, mackerels, herring, and squid.

Bonitos are also hunted extensively by humans for commercial and recreational purposes.

How to Catch Bonito Tunas?

The rod and live baits aren’t just effective but are also the most ecological method for catching bonito.

That said, lures work just as well as baits. The fish are instantly drawn to flashy silver lures, and since they travel in schools, you can entice many bonitos at once.

Compared to other fishes, bonitos aren’t jumpy or shy.

As such, any small hard-bodied (metal or plastic) lure will work just as well, whether you are casting from shore or trolling with your boat.

Bonito tuna is a strong and powerful fish that will put up a fight if caught on rod and reel.

Make sure your reel is of high quality and has seamless drag if you are attempting to catch Bonito.

For fly fishing, a 7 or 8-weight rod with a 250-grain sinking line works perfectly.

With the right bait, catching bonito is easy. They are aggressive predators and attack bait the moment they see it. Some will even jump out of the water to have a go!

Bonito tuna when cooked in olive oil as a fillet, or served in sushi, has a taste that is tender, flavorful, and rich.

It is safe to say that it is one of the tastiest fish to eat, especially when fresh.

The meat doesn’t have a darkish color and is extremely tender, packed with nutritious oil and protein.

Bonito tuna is a fast-moving game fish, sought-after by both commercial and sport fishermen.

There are four main species of Bonito found worldwide, mainly in the Atlantic, the pacific, the indo-Pacific, and near Australia, New Zealand, and New Guinea.

Bait-fishing, fly-fishing, and trolling are all excellent methods for catching tuna.

How to Catch Bonito Tunas?

The traditional method with hook and line works best for catching high-quality Bonito recreationally.
The rod and live baits aren’t just effective but are also the most ecological method for catching bonito.

As it is a migratory fish, Bonito swims to great lengths and covers unimaginable distances to find food, safety, and spawning grounds. It requires them to use a high amount of energy to swim so fast for so long. High energy equals high oil content. They are called “the chicken of the sea” due to their stark white meat.

What kind of Fish is Bonito Tuna?

Bonito is a small to medium-sized predatory fish belonging to the same family as tuna and mackerel – the Scombridae family. In the angling community, Bonito Tuna is known by many names. It is often called striped bonito, little bonito, common bonito, white tuna, striped tuna, skipjack, bunny, and horse mackerel.